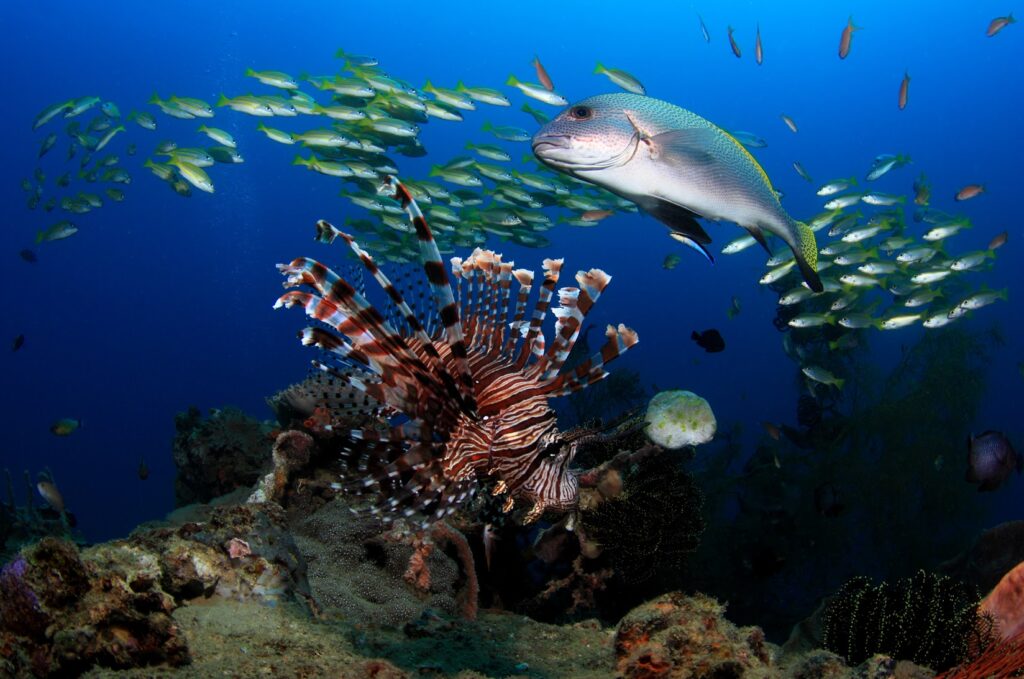 To celebrate World Ocean Day on June 8th, USAID’s Tourism For All project organised a “virtual launch” for the announcement of the Ombai-Wetar Strait as a Mission Blue Hope Spot, following a successful application by the Assosiasaun Turizmu Maritima Timor-Leste (ATM-TL).   Hope Spots are special places that are critical to the health of the ocean that help to recognize, empower and support local communities and governments around the world in their efforts to protect their marine ecosystems. The ‘Ombai-Wetar Strait Hope Spot’ recognizes the importance of Timor-Leste’s northern ocean, from Batugade to Jaco Island, with its globally-significant coral reefs and marine biodiversity – and also the potential for sustainable marine ecotourism development. 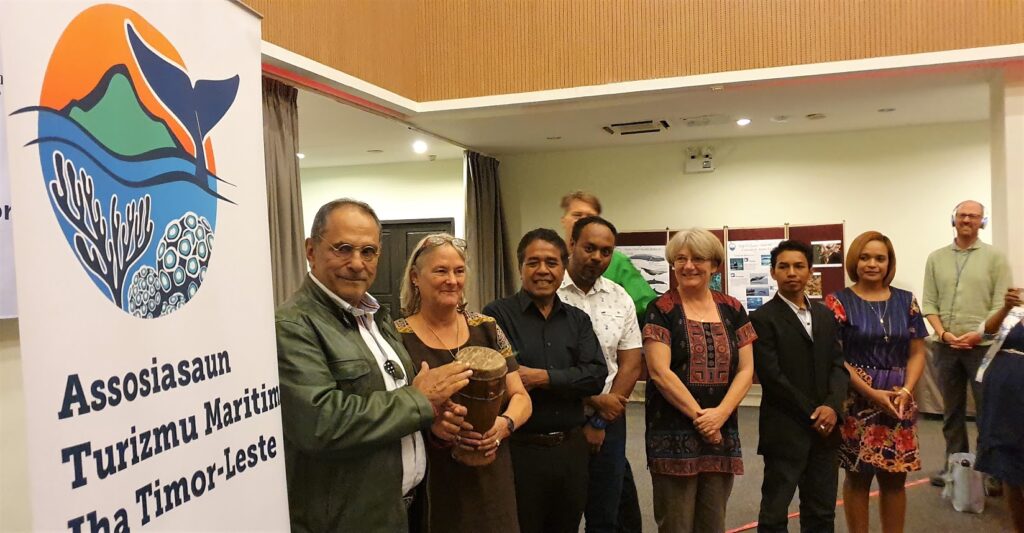 With the nomination, Timor-Leste joins a marine conservation network spanning more than 100 countries, benefiting from Mission Blue’s expertise and support in building collaboration between partners to advocate for legal protection of its Hot Spot, with increased visibility and opportunities for education and marketing through the organisation’s global platform.

The U.S. Government has provided major support for ATM-TL and its work in securing the Ombai-Wetar Strait Hope Spot nomination.

“I am delighted that our Tourism For All Project has been able to make a tangible contribution. Natural resources protection is vital to the United States’ vision for the Indo-Pacific and the Hope Spot designation is important recognition of that,” said Kathleen Fitzpatrick, U.S. Ambassador to Timor-Leste.

In his message, Mr Ramos-Horta said that Timor-Leste had the world’s greatest marine biodiversity, and whilst reefs in neighbouring Coral Triangle countries had suffered damage from dynamite fishing and other destructive environmental practices, Timor-Leste’s reefs were the healthiest in the region.  “The Hope Spot means that environmentally-aware tourists and scientists, they’ll all want to come and visit to study the Ombai-Wetar zone.”  Mr Ramos-Horta emphasised that whilst the Hot Spot may open a window of opportunity to diversify the country’s economy through tourism development, the benefits must extend to the whole community. “I would like to thank the United States Ambassador Kathleen Fitzpatrick for her hard work and her efforts to increase financial support for Timor-Leste, with the focus on sustainable tourism.  I would also like to thank her for her leadership and USAID for its commitment to supporting the Tourism For All project. Tourism is not just for some of the people, it is for all of the people,” he said.  Mr Ramos-Horta concluded his remarks with an environmental message: “I am asking the whole community to stop littering, especially those who live by the sea or along rivers,” he said, explaining that when people throw rubbish into the river, it is washed out to sea and it damages the marine environment.

Ramos-Horta’s remarks were echoed by several participants in the virtual launch, including university students and members of environmental groups.

Timor-Leste’s Director General of Tourism, Jose Quintas, congratulated ATM-TL for its success in securing the Hope Spot nomination, saying that it would help to bring tourists to the country to see whales, dolphins, dugong and its pristine coral reefs. “We are proud of the Hope Spot nomination. It’s an advantage for Timor-Leste, but everyone needs to make a contribution to protecting the marine environment, especially in coastal communities, as well as in the private sector, the dive centres and marine tourism operators. The government also has to make sure that the regulations are implemented properly, continue to protect our marine biodiversity for future generations.”

The successful Hope Spot nomination was ATM-TL’s first major achievement, following the establishment of the organization in 2019 with support from USAID’s Tourism For All project.  The Hope Spots initiative was founded by the renowned ocean explorer, scientist and founder of Mission Blue, Dr. Sylvia Earle. The Mission Blue alliance includes more than 200 respected ocean conservation groups and like-minded organizations.  In a video message shown at the ATM-TL launch last August, Dr Earle said: “I want to salute you for what you are doing in Timor-Leste, for celebrating your ocean, taking care of your ocean and sharing it with people from all over the world.  With hundreds of blue whales swimming past Dili every year, families of sperm whales and many different species of dolphins so close to shore and dugongs just five minutes away from the International Airport, you have the most extraordinary and precious blue world in your hands.  Truly incredible! I want to assure you that you have mine and Mission Blue’s full support and I very much hope to experience Timor Leste’s amazing blue wonderland myself soon: you truly are reason for hope.”

Bringing together coastal communities, local organisations and marine tourism operators in Timor-Leste, ATM-TL is working to develop the sector, whilst ensuring the conservation of the marine resources on which they all depend. Marine Biologist Professor Karen Edyvane, who has been conducting scientific studies and supporting sustainable community-based tourism development in Timor-Leste since 2006, was elected ATM President last August, with a board of directors drawn from community, business and government representatives.

Prof. Edyvane added, “USAID’s vision and support has been vital in the creation of the ATM-TL.  It’s been amazing to see all the marine tourism stakeholders – operators, businesses, conservationists, regulators, scientists, managers – coming together, sharing, talking and working together to create a shared vision and for ocean conservation and marine tourism development in Timor-Leste.”

Cassio Schumacher, General Manager of Compass Diving, a member of ATM-TL, said, “I have been involved with marine tourism in other countries around Southeast Asia, and it isn’t always the case that so many stakeholders of a sector, industry, have the opportunity to work together towards its development. This is where I feel that ATM-TL is contributing the most: as a platform for it to happen. The challenge is, and will be in the future, to diplomatically achieve balance between different interests and contribute towards a reasonable equilibrium between the growth of marine tourism and development of conversation and research efforts while still listening actively to different –  and possibly disagreeing – opinions”.

Prof. Edyvane explained that there are many challenges for strengthening and growing the tourism industry in Timor-Leste, some of which are dependent on complex, macro-economic factors:  “Other issues are specific to marine tourism – from lack of boating infrastructure, ensuring maritime and diving safety, to the urgent need for national guidelines and standards, licensing and regulations for marine tourism activities. ATM-TL have developed a national vision and detailed plan for the marine tourism industry and ocean conservation, working with partners and tour operators on improving marine tourism marketing and promotion.  And in partnership with USAID, we’re also running our first marine tourism grants program – to help implement some of these priority activities and further develop the marine tourism sector.”

The Ombai-Wetar Strait passes between mainland Timor and the island of Atauro, home to the President of the General Assembly of the ATM-TL, Avelino Fernandes.

“The Hope Spot will raise Timor-Leste’s international profile for its beautiful marine resources and strengthen economic growth through promoting tourism,” Mr Fernandes said, “I think it will help the local community to consider how protecting the marine environment can also improve their lives through fishing, tourism and marketing local products.”

Atauro made international headlines in 2016 with the publication of a survey by Conservation International, which found that the island had the most bio-diverse waters in the world.  For most of the year, the island is too arid for agriculture and local communities depend on fishing to support their families. The challenge is to develop alternative livelihoods through tourism, whilst protecting the marine environment. Prof. Edyvane explained, “We need to ensure that local people and communities are given proper training, opportunity and long-term support to develop businesses in marine ecotourism.  This is why I think developing community-based marine ecotourism and livelihoods is probably one of the most important goals of the Hope Spot.  If we cannot link ocean protection to real economic benefits and employment for local communities – through ecotourism – any successes will be fragile, short-lived and likely, fail.”

Mr Fernandes agrees: “The community can earn a living by fishing and tourism, but it must be done sustainably,” he said, “We need to strengthen regulations and help the community to diversify its economic activities so that they don’t depend so much on marine resources. ATM-TL plans to increase environmental education and protection at local and national level to encourage community-based eco-tourism.”

Prof. Edyvane added: “I think Atauro Island is also showing us how best to progress marine ecotourism and ocean conservation in the rest of the country.  It’s the recognised birthplace of ecotourism in Timor-Leste – it also pioneered the nation’s first eco-lodge, planned, built and led entirely by the local community.  And it did this with very little support from the international community. So, the important lesson here is that actions really need to be local, targeted and community-led to be sustainable – and they don’t always need to be big and expensive.”

Before the COVID-19 crisis, Timor-Leste – and particularly Atauro Island – were poised to gain an increase in dive tourists. Local businesses had started to spring up to cater to visitors:  handicraft workshops, guesthouses and land-based excursions. But now their income is gone and the community will once more be relying on fishing and reef gleaning in order to subsist.

“We still have a lot of hard work ahead,” Prof. Edyvane said, “But this pause can be a silver lining and lead to a new beginning and reimagination of how tourism in Timor-Leste can be more robust, profitable and impactful in the future. This is an opportunity to galvanize tourism stakeholders and reboot tourism in alignment with the National Tourism Policy. When shelter-in-place orders are lifted and businesses reopen their doors, a new chapter will begin for Timor-Leste tourism.”

Ann Turner/USAID’s Tourism For All Project