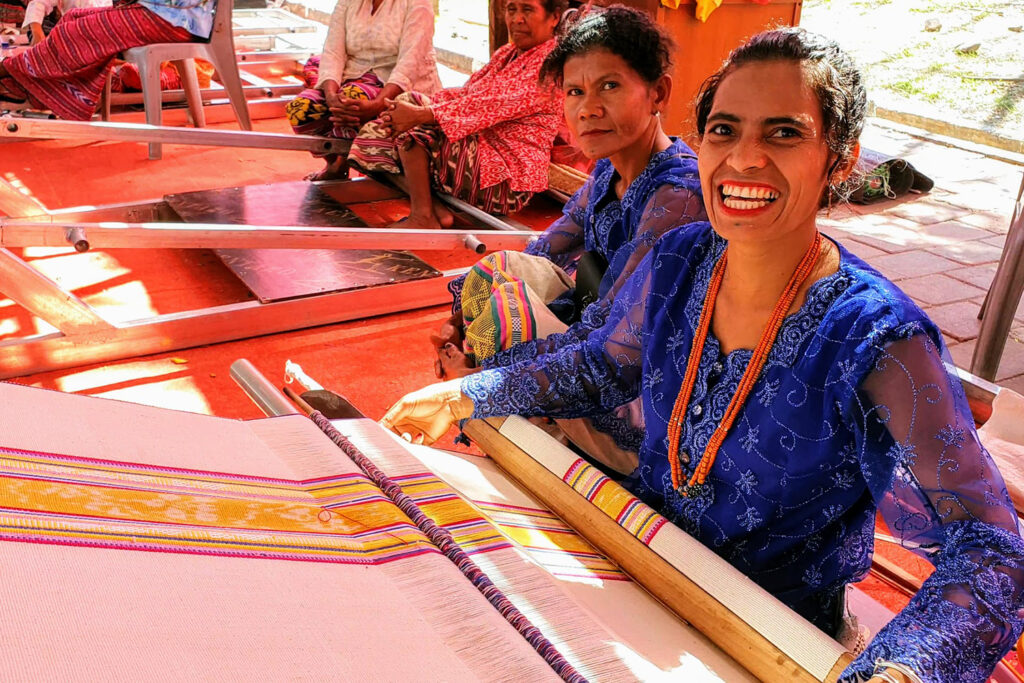 Traditional Tais weavers are hoping that UNESCO recognition will help to preserve their craft for future generations
Photo: Ann Turner/USAID’s Tourism For All Project

Last March, Timor-Leste celebrated an important cultural milestone when it officially submitted its application for the country’s traditional textile – known as tais – to the United Nations Educational, Scientific and Cultural Organization (UNESCO), to be inscribed as an “Intangible Cultural Heritage in Need of Urgent Safeguarding”. If successful, this will lead to Timor-Leste’s first-ever government-led UNESCO designation. Tais would then be listed alongside renowned cultural assets from other countries, such as traditional hand puppetry in Egypt, the Bisalhães black pottery manufacturing process in Portugal, and the ancient art of hand-crafting “phinisi” boats in Indonesia.

Speaking at the ceremony to witness the signing of the application, the Secretary of State for Art and Culture of Timor-Leste, Teofilo Caldas said, “I am confident that this nomination will gain the approval from UNESCO and that Tais will be recognized internationally – affirming our cultural identity as one people and one nation.”

UNESCO’s decision about Timor-Leste’s application will be given towards the end of 2020.

The UNESCO application conditions are stringent and preparation of the documentation was a lengthy process, starting in January 2019. USAID’s Tourism For All Project provided support to help Timorese authorities and stakeholders every step of the way, starting with the creation of a National Committee for Intangible Cultural Heritage to coordinate the application procedure, and assistance to the Government of Timor-Leste in securing funding from UNESCO to finance the preparation of the nomination file.  One of the primary UNESCO requirements is the close involvement of the various stakeholders – ranging from Government representatives to national NGOs and community weaving groups – to ensure a full consensus supporting the application. This was achieved through extensive consultations that took place at a forum organized by USAID, on the theme “Protecting, Preserving, and Promoting Tais: the Road towards UNESCO’s Intangible Cultural Heritage Recognition”.  More than 100 people from local and international organizations, development partners and tais weavers contributed to the drafting of a plan to safeguard the tais tradition, with a funding request from Timor-Leste to UNESCO for its implementation. The final step in the application process was the production of a short film required by UNESCO, to describe the significance of tais and the traditional spinning, dyeing and weaving skills used to make it.

Local NGO Timor Aid has been working with tais weavers for more than two decades, and the organization’s Culture Program Team Leader Rosalia M Soares  represented the organization on the National ICH committee: “We are bursting with pride to see our long-term dream turn into reality,” she said, “We would like to thank USAID’s Tourism For All project for their insight into that dream, and for triggering the tais registration process with UNESCO. We are deeply grateful for the support of the American people.”

Timor Aid co-founder Maria do Ceu Lopes da Silva added: ”UNESCO recognition would be a huge step forward to ensure the preservation of traditional Tais production. It will have a positive impact at national and international levels.  UNESCO recognition will enhance national pride, strengthen cultural identity, and officially acknowledge and honor weavers’ artwork and their skills. It will provide an opportunity to raise the recognition of Tais not only as tradition, but also as a tourism product, which will contribute to expanding economic opportunities for rural women. Tais could be the future Roving Ambassador of Timor-Leste for the promotion of our national cultural heritage around the world.”.

This traditional hand-made textile, woven by women across Timor-Leste, plays an important role in the life of Timorese people. The entire process of producing tais requires delicate skills, patience and time. Raw cotton is grown in community farms, processed and spun by hand, and dyed using locally-available plants, roots and trees. The yarn is woven on a simple backstrap loom: some pieces produced by expert weavers take months to complete and can sell for hundreds of dollars to visitors. Other items are reserved for community use and are not for sale. Timor Aid’s Ms. Soares explained: “Tais is ever-present as a cultural necessity in the lives of all Timorese regardless of socio-economic background. Tais is an imperative presence during birth, traditional marriage contracts, funerals, and in traditional rituals. The Timorese must wear Tais for all traditional ceremonies. They also offer Tais to foreign guests, and they wear Tais to represent the country abroad”.

Not only is tais an important source of income for Timorese women and their families, it is an essential expression of culture. Ms. Lopes da Silva said that local history and cultural legends are expressed in the motifs woven into tais, which vary from region to region. For example in Oe-cusse, where Portuguese missionaries brought the Catholic faith to Timor-Leste more than five centuries ago, Ms. Lopes da Silva explained that nuns introduced European patterns on paper, “to teach the weavers in Oé-cusse to incorporate European religious themes, such as angels, macramé copies, even Botticelli inspired images, into their tais”. In other municipalities, tais motifs are inspired by ancient traditional Timorese legends, such as the myth of the crocodile, and local flora and fauna.

The 24-year struggle for independence from Indonesia caused irreparable loss to the traditional ways of producing tais: “Many master weavers died. Immigration and forced displacement of Timorese from rural areas to cities, from highlands to valleys, and environmental destruction contributed to the shortfall of raw materials and loss of skills and original designs, many of which were never to be recovered. Timor-Leste doesn’t have a written tradition. Unlike other countries, particularly in the Asia region, where traditional textiles have recorded history, Timor-Leste’s Tais production was based on memory alone,” Ms. Lopes Da Silva said, “Grandmothers passed the weaving skills to their daughters, from daughters to granddaughters and so on.  It was the method of creating a memory chain of knowledge. Cultural heritage is important, because it makes the past continuous. Weaving, songs, dances, languages and rituals, strengthen our cultural identity. They connect us to a range of emotions, feelings, offer information, inspiration, education, myths and facts about the lifestyle and development of our communities, relationships, successes and tragedies.”

Beyond its cultural significance, tais is one of the “must have” souvenirs bought by tourists, a vital market for local weavers. Tais also inspires the fledgling fashion industry in Timor-Leste, presenting an opportunity, but also a threat to the integrity of tais culture: “Urgent monetary needs force the weavers to produce cheap tais, woven with industrial yarn of poor quality, for quick sale. This creates conflict between tradition and modernity,” Ms. Lopes da Silva warned.

As Timor-Leste struggles with economic hardship and uncertainty about the future of its tourism industry in the face of the COVID-19 pandemic, Ms. Lopes da Silva hopes that Timorese women – who traditionally work from home – will keep producing their woven art and lay down stocks for later sale.  In the meantime, she is looking forward the day when the UNESCO decision is announced: “At international level, there’s an expectation of an upsurge in demand by museums, collectors, galleries, and international exhibitions,” she said, “Which in turn could trigger integrated rural development investment in the environment, agriculture and agroforestry, where the raw materials for tais-making come from: cotton, seeds, roots, plants and tree barks to extract natural colours”. She is hopeful that there will be increased institutional support for the creation of a National Tais Museum, more preservation work, curatorship training and the development of small to medium textile weaving industries. Timor Aid also has plans for a Tais Resource Centre and intends to ask the Government to declare a National Tais Day. These initiatives would serve not only to attract tourists, but also to raise awareness in Timorese youth about the importance of preserving their own cultural assets. And if the tais application is successful, as a result of their experience, national organisations – especially government officials – will also be able to apply for additional nomination files for other Timorese cultural assets in the future.

Ann Turner/USAID’s Tourism For All Project

The whole community participates in a ceremony to celebrate the corn harvest inSuai, Covalima Municipality in 2012. Wearing tais is required at this event.