If you are a coffee drinker you are in for a treat when you holiday in Timor-Leste.  Coffee produced here is high quality, delicious and exported all over the world. It is a hot commodity selling at a premium price on the global market with main markets – United States, Germany, Portugal, Indonesia and Australia. The Timorese are also great coffee drinkers, with a preference for it black and very strong.

Coffee was introduced to East Timor in the 1860s by the Portuguese. It quickly became a major export (overtaking sandalwood), and by the mid-1860’s accounted for at least 50% of the value of total exports from the colony. All of this production, however, was owned by a handful of Portuguese landowners, and local communities were only involved in harvesting. When, in the mid-1970s, Indonesia took control of the land, coffee became less of a focus and East Timor’s coffee production significantly declined with the loss of farming skills and left a legacy of aged trees. Since independence in 2002, the coffee sector has been quickly rebuilt, and coffee now accounts for some 80% of East Timor’s total exports and is the country’s only cash crop, grown by almost 1/3rd of Timorese households.

A factor that makes the East Timor coffee notable when it comes to coffee is that, in addition to grow arabica and robusta, the country has its own hybrid coffee variety – the Timor Hybrid – which dates back to the pre-WWII period. Timor Hybrid was born of the spontaneous mating of a Robusta and Arabica plant and is a highly disease resistant and high yielding variety that has now been planted around the world. Timor Hybrid also forms the backbone of the well-known Catimor and Sarchimor varieties.

The country is steadily increasing quality of its coffee, which is passively organic, as fertilizers and pesticides have never been introduced, and 100% of the coffee is shade grown. Most of the produce is used for exporting, but there is a great number of Cafés offering signature Timorese coffee in Dili, and the districts. 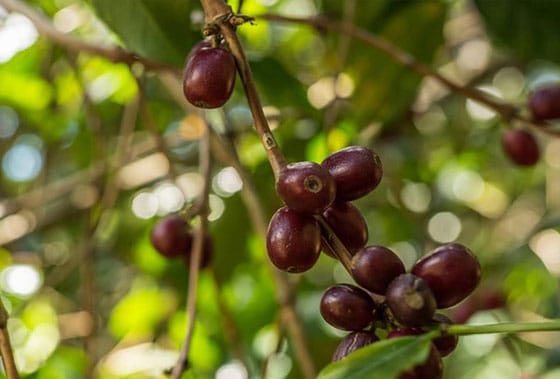 Coffee is grown in Timor-Leste’s steep highlands and the coffee forests with their large shade tree canopies now cover an estimated 52,000 ha. During the main harvest, June to August, you’ll see the Timorese picking the red coffee cherries and if travelling in the producing areas you’ll need to veer around patches drying in the sunshine on the road edge.  Ermera accounts for half of Timor-Leste’s coffee production with other important areas being Ainaro, Maubisse,Aileu, Manufahi, Liquica and Bobonaro.